Warechu (ワレチュー, Warechū?) , known as Pirachu in NISA translation, is a strange mouse character who first appears in Hyperdimension Neptunia mk2. He sometimes appears alongside Underling, who happens to dress in similar themed clothing resembling Warechu. He believes himself to be the official Mascot in his world/land/town, filled with other Mouse like himself. In Hyperdimension Neptunia Victory he is one of the Seven Sages.

After being injured, then healed by Compa, Pirachu develops a crush on her.

Warechu has a lot of confidence and is loyal to Arfoire, but is quick to retreat should he lose a battle. As explained above, he has a crush on Compa, believing her to be an angel after she offered to heal his wounds. He holds Compa in high esteem, even when she views him as an enemy.

During battle he frequently talks about Compa, who has no idea he likes her so much or holds any affection towards her. He often calls her "Compa-chan" or "my sweet Compa".

Warechu is a small gray mouse with two white whiskers on each cheek and big red eyes, appearing almost lifeless. While he has black coloring on his arms, legs, and inside of his ears. He possesses two small red-purple demon wings and a rat-like tail with a big black heart on the end and a zig-zag split in the center.

On his chest is a red and yellow broken heart marking and he wears red boots.

Warechu is first encountered when the group found him injured. Compa felt the need to help him, so she heals his wounds. After he wakes up, Warechu is immediately smitten by her, asking for her name before he ran off. Later, he reveals himself to be one of Arfoire's followers, then goes on to talk about Compa joining him, but Compa, who after learning his true identity instead calls him her enemy and claims to hate him, much to his unfortunate horror. This sends Warechu nearly over the edge and he engages the group in battle, only to be defeated and retreat.

"In the world of mice I am, well... The third most famous Mascot-chuu!?"

A monster with the form of a mouse and self-proclaimed mascot of the mouse world. Originally Warechu began as a small-caliber villain, distributing tools to play games for free. He soon became a member of the Seven Sages almost without noticing.

Since his combat abilities aren't that great, Warechu's main job is to do all the low-level chores. He calls Rei "Mature woman" and Arfoire "Middle-aged lady", and is proud of being foul-mouthed without any restraint. Like in the last game, he has a crush on a younger version of Compa. After his first confrontation with Plutia (and her HDD form), Warechu is utterly terrified of her.

Like his counterpart in Victory, Pirachu is Arfoires partner in crime aiding her with her schemes. As with his Hyperdimension and Ultradimension counterparts he grows a crush on Compa. 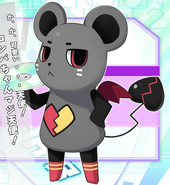 Add a photo to this gallery
Retrieved from "https://hyperdimensionneptunia.fandom.com/wiki/Warechu?oldid=45876"
Community content is available under CC-BY-SA unless otherwise noted.