Tsunemi (つねみ) is a character that appears in Hyperdevotion Noire: Goddess Black Heart.

Tsunemi can't express her own feelings well, and has an unnatural way of speaking, like a robot. She is very sensitive to the inner feelings of other people and finds that she can only express her true feelings when she sings.

She wears a dress with a revealing top only covering her front. It consists mainly of black and has pale blue/off white, light gold, and dark blue detailing. Above her breasts, in the center of them, and at the bottom of the skirt is pink translucent material. She also has a blue music bar at her groin area, surrounded by four pink buttons with an X, O, triangle, and square. She also wears black sleeves and tall boots, both with pink detailing, and slightly longer white socks. 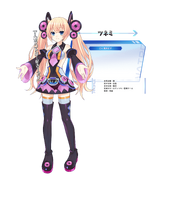 Add a photo to this gallery
Retrieved from "https://hyperdimensionneptunia.fandom.com/wiki/Tsunemi?oldid=44919"
Community content is available under CC-BY-SA unless otherwise noted.