The Remake System is unique key feature that first appeared in Hyperdimension Neptunia Re;Birth1. It enables the player to manipulate various aspects of the game such as difficulty, the ability to create new items, add new playable characters, add new dungeons and influence material harvest spots at will.

Similar to the Item Development system featured in Hyperdimension Neptunia mk2 and Hyperdimension Neptunia Victory, the player will need specific materials in order to create different modifications and items. In addition to requiring several materials, the player may in some cases also need to meet other requisites, such as attaining a certain Lily Rank level between two characters, or increasing a nation's shares to above a certain value. By satisfying the criteria of the System File's requirements, you can incorporate that specific system into the game for immediate effect.

Each plan created will use up a certain amount of MB. The amount of space a plan will use up depends on how much change the plan will bring into effect when toggled (Plans that craft accessories use as little as 1MB, as opposed attempting to craft a plan that adds another playable character can use up as much as 1024MB). Most plans that are created have the option to be toggled on or off, but cannot be deleted to restore previously used MB in creating the plan; prompting the player to think twice before crafting plans. 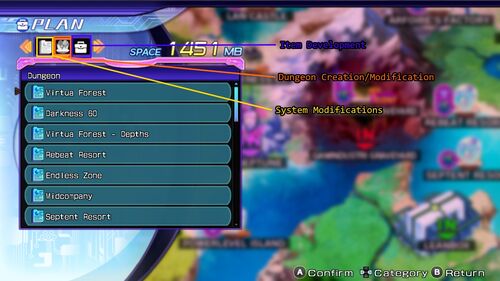 Plans can be acquired from chirper events, as rewards from Stella's ☆ Dungeon, items in dungeons, and as hidden treasures. There are four plan categories that are classified under the Remake System: System, Battle, Dungeon, and Item Development.

Retrieved from "https://hyperdimensionneptunia.fandom.com/wiki/Remake_System?oldid=43779"
Community content is available under CC-BY-SA unless otherwise noted.