In earlier drawn images, Neptune seemed to have been red and pink themed instead of purple.

Compa had a few beta differences between her current and beta self. Such as:

IF was one of the characters to have a lot of previous versions when compaired to non-HDD girls. Originally she seemed to play the role of a Mentor who was also a Demon.

From what is seen, Nisa had three beta designs.

As she had many, MANY beta images, recolors will not be listed. Also revealed, the boxart had her in a different pose during beta.

For characters/images of beta characters but it's unknown who they are. 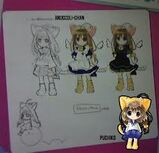 Add a photo to this gallery
Retrieved from "https://hyperdimensionneptunia.fandom.com/wiki/Prototype?oldid=30412"
Community content is available under CC-BY-SA unless otherwise noted.