Her nickname is "Pururun" ("Plutie" in the English Version) and she's known for her gentle appearance, although she is quite difficult to read.

Plutia has a very gentle appearance, and does not seem to be a bad person or naughty. However, she is usually skipping out on her Goddess duties, much like how Neptune would if given the chance to go and have fun instead. Considering she is seen holding a Neptune doll, she may very much like Neptune. One of her special attacks show her stomping on this doll (with a voodoo doll effect on enemies), so she may have a minor (compared to Iris Heart's) sadistic streak. She values friendship, and takes it very seriously.

Plutia's goddess form, while she actually retains her carefree voice, unlike most others whose voice does change, her characteristics change instead. She becomes very sadistic and cold, causing trauma for everybody, friend or foe alike, however she seems to direct such insults to villains to damage their ego while driving her allies to do better through enraging them. Due to this extreme sadistic streak , Neptune refers to this form as "Sadie", a play on the word "Sadist" and her nickname "Plutie". This tendency is revealed in one of her special attacks, where she stomps on the enemy, and the players are treated to a first person view of the monster first. She also likes to torment people and hates people who lie to her and ruin her fun.

Plutia has small similarities in terms of design to Neptune herself. But whether she has a personal connection or not is unknown. She looks to be pre-teen, but may very well be an adult or close to one in terms of age. She has fair-pale skin and bright pink eyes. Her hair is about waist length with very wild, messy bangs framing her face while her hair looks to be worn down, but in a very thick/big braid held with a pastel pink frilled ribbon.

She wears an odd outfit, consisting of a very loose powder blue top with a frilled neck segment with a bright pink-purple bow and a long white segment in the center held with a white multi-piece belt with a purple piece in the center. At the top on the sleeve sides are pink cloth segments with ruffled white lining and a single white stripe on each piece. Her dress has small sleeves with button-clasp, making it look like a shirt pair of overalls. On each sleeve is a peach and white line, while the sleeves cuff buttons to the upper segment of sleeve, most likely to keep them from being too long. She also wears an uneven length white skirt piece that looks longer in back, and opened in the middle. Under her skirt, she wears white panties with a pink bear printed on the back. Along with pink and white striped socks and pink bear shaped fuzzy slippers. She looks dressed for bedtime.

As Iris Heart, Plutia's hair becomes a darker, purple color and lengthens somewhat as it's pulled out of its braid. Her bangs remain the same, though longer and tend to cover her eyes easily. Her eyes seem to be the same shade of pink but are much more squinted. She wears a black HDD outfit with pink accessories. Consisting of a tank top like bustier piece revealing some of the cleavage on her breasts with very thin straps and button-like pieces with multiple holes in the center, a neck piece with a glowing line and pink line below it, small straps connecting to her lower bikini piece, almost shoulder length gloves with multiple pink pieces, and long boot like parts connecting to the outfit by the outer piece. She also has on pink and black thin earrings.

In the beginning of the third chapter, Noire whines and complains about how Lowee is copying Lastation in terms of tech. This annoys Plutia so much that she gets angry. Histoire points this out to Noire, who was the one who constantly reminds Neptune not to make her angry and realizes she has dug her own grave. She transforms into Iris Heart and demands Neptune and Histoire to leave while she has a "chat" with Noire. After two hours Plutia comes out of the room feeling refreshed. Noire, however, was broken.

She falls out of the sky and says she's Planeptune's CPU, making it her first appearance in the anime.

Despite not making her physical appearance in this installment, she is briefly mentioned by Nepgear and older Neptune in one conversation in Zero Dimension G story arc.

Also makes an appearance as a scout obtained via DLC.

Plutia wields a doll in her human form and a broad bladed katana in her HDD form. Her powers seem to revolve around the use of lightning and her signature move; Fighting Viper, is a good example of it. Her Final Form CPU transforms her into a stealth wing which apparently possesses the power to destroy the world (With Neptune's help). Fortunately that is just a battle effect/dramatization (we hope).

Stat wise, Plutia is magic oriented, having abnormally high INT. Her best skills are Rush oriented magic damage attacks, and she has no skills based on her STR. VIT, MEN and MOV are where she suffers, having some of the lower tier defenses in the game. She does make this up by having access to healing skills and buffs to her magic. 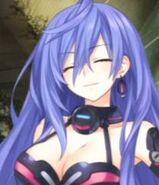 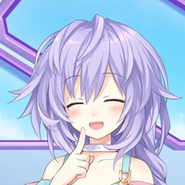 "why did i saw plutia/iris heart on the villans wiki sometime ago?"

* Plutia on the Hyperdimension Neptunia wiki.