Start a Wiki
Planeptune (プラネテューヌ, Puranetyūnu?) is the land blessed with the CPU Purple Heart's protection. When she cannot be there to run it, Histoire takes her stead. Despite its advanced technology and civilization, it is the land most ravaged by monsters. Some believe their goddess was once defeated by an overlord, creating a rift in Planeptune´s protection and causing an increase in monster attacks. To add credence to these beliefs, the CPU Purple Heart has not been seen by her people in over three years.

In terms of appearance, most of its buildings are blue and white.

Planeptune retains its appearance as a futuristic nation filled with towering skyscrapers and futuristic like building structures. It still looks to be the nation with the most advanced technology in all of Gamindustri. A noticeable structure on Planeptune is the Neptower, a large tower which is clearly visible within the city.

According to its history, Planeptune was on the verge of annihilation until Histoire and her comrades successfully prevented the crisis. Histoire would then save the nation again from its economical crisis. Due to her efforts, she was elected the head of state.

In terms of geography, Planeptune governs the western parts of Gamindustri. Its two surrounding cities are Erethisan City and Haneda City. Adding more credence to the fact that Planeptune is the nation most ravaged by monsters, its capital city is the nearest to the Gamindustri Graveyard . 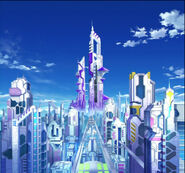 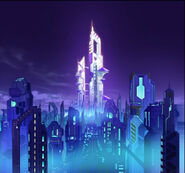 Retrieved from "https://hyperdimensionneptunia.fandom.com/wiki/Planeptune?oldid=48089"
Community content is available under CC-BY-SA unless otherwise noted.