The other Neptune that Nepgear meets in the Zero Dimension. Like the smaller Neptune, she has a bright and positive personality. Contrary to her mature look, however, she displays some semblance of innocence or defenselessness in her actions.

Her hobby is filling her specimen book, the "Nep-Note," and travels to other dimensions in search of rare bugs. While she's called the "Older Neptune," it's still unclear whether she's actually an adult or if she's actually still just under aged.

For the most part, this Neptune is identical to Hyperdimension's Neptune. Just like her counterpart, this Neptune is careless and carefree. She'll jump head first into any situation dangerous or not, and does not bother to think about the possible consequences that await her. She is generally very affectionate to cuter people, and has tendencies to break the fourth wall. Neptune is often surprised easily and is a klutz, and she usually shows an eager and perky behavior.

This Neptune wears a black-purple schemed one piece parka similar to the original Neptune's parka but this teenager version of Neptune has more cleavage showing and has a bigger bust size like Nepgear. Her hair is longer than Neptune's and is closer to Nepgear's. Instead of white D-Clips like Neptune and Nepgear, she wears two black D-Clips. 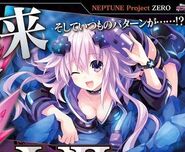 Double Neptune
Add a photo to this gallery
Retrieved from "https://hyperdimensionneptunia.fandom.com/wiki/Neptune_(Ultra_Dimension)?oldid=48030"
Community content is available under CC-BY-SA unless otherwise noted.