Lowee (ルウィー, Ruuī?) is the land by the CPU White Heart's protection.

Lowee is a landmass filled with snow and has a cold climate. The land is surrounded by snowy mountains. The theme colors of its surrounding is mostly white and any color with a light hue, and its land gives a serene vibe, hence its nickname, "The Land of White Serenity."

Starts when the Neptune, IF and Compa are in the basilicom of Lowee. Neptune and Compa are talking about the cold temperature of the land and how it affects them until the Sanctified of the basilicom approaches them. Through the talk with the Sanctified they learn that they are in one of the local branches of each city and the Central basilicom is where the Goddess of this landmass resides. Given a map guide the group heads to Central Basilicom and head through a snowy forest.

The financier of the central basilicom announces to white heart that some travelers are requesting an audience with her. She reluctantly complies after some persuasion from the financier where she immediately recognizes Neptune and instantly treats her rudely. Soon she could not tolerate Neptune's talking about her expectations in several areas of Blanc as a Goddess and told the party to get out and out of anger she forbids them from returning. Moments later she is approached by the Evangelist Conversation telling her about how shameful her performance was earlier but Blanc instead complains about the increasing casualties from monster attacks. The Evangelist then remarks and reminds her of her character as a Goddess, pissing Blanc off in the process before leaving.

The Scene starts with Neptune getting sick. Compa explains this as "Neptune never covering up at bed time." She tries to make some medicine for Neptune but to no luck. IF offers to help but Compa wishes to cure Neptune on her own. A little girl who cannot stand watching their pathetic attempts steps in to help, she introduces herself as Gust and demonstrates her skills by making a potion to cure Neptune. She also charges them for the ingredients as they were valuable, but decides to not charge them for labour. Compa compliments Gust's career of selling synthesized items while traveling alone, which flatters Gust so much she lowers the prices. In return Compa ensured Gust to look for them if she needed to find any ingredients so that they can gather them for her.

The party are in the Basilicom where Neptune is talking to the Financer (Miss Chamberlain) when the Evangelist overheard their conversation and joined in. She tells them about Overlord Momus and warns them about the Overlord’s messenger punishment. Nevertheless the group treks on the dungeon Miss Chamberlain told them about. While exploring they could not find any sign of Key fragments and ready to return to the Basilicom for more answers a mysterious girl suddenly appears! She targets Neptune but IF and Compa don't allow it while Neptune states the three of them are as one party. The mysterious girl, surprised by this recalls how Neptune lost her memories before the fight.

Eventually losing she retreats while Neptune/Purple Heart, in her HDD form cant remember who this girl may be as Compa and IF try to figure it out. In the end the party leaves the issue behind for now with Compa saying that the mysterious girl is like a “Nep-Nep addict ”.

They returned to the Basilicom only to find out from the Financier that the Goddess will not be seeing guests today and that she can't do anything to change the Goddesses demands and made them leave. IF says that they have to leave for now as she had already thought up another plan in case this happened. When they reach the town of Lowee, IF reveals to Neptune and Compa that she belongs to the Guild. Compa explains that the Guild are people who don't worship the Goddess on they land they are born in. Neptune on the other hand just learns that the Guild does not believe in the Goddess' power and IF explained it to Neptune that they are so-called heretics. IF gave an example that someone born on Lowee worshiped Lady Green Heart instead of Lady White Heart. Neptune now knowing, asks IF who she believes in. IF however doesn't tell her and continues to explain the heretics gathered together and established the Guild which is the same on every planet, but people looked down the Guild. Compa then asked if the people in the Guild travel the word like her, IF replies that one of the answers is here in Lowee.

Lowee retains its appearance from Hyperdimension Neptunia in Hyperdimension Neptunia mk2, minus its location in a floating landmass. The land is surrounded with snowy mountains and snow, giving the land a cold climate. A noticeable structure is the castle in the middle of the land, which is surrounded by colossal walls. The castle has white walls and red roof, with a tower with a spiraling structure filled with lights.

Lowee focuses on its magic application. Magic is widely used for almost all Lowee's people's conveniences.

In terms of geography, Lowee is located in the northern part of Gamindustri. Its two surrounding cities are Randome City and Sim City.

After gaining the support of Lastation's mascot, Nepgear and the party heads to Lowee next to gain its mascot's support. On their arrival, they encounter Underling, who was already spreading Arfoire chips. On their confrontation, Underling takes little girl clad with blue clothing as hostage and takes off. The party follows suit and arrives at Lowee Global Expo East.

The CPU Candidates of LoweeEdit

On Lowee Global Expo East, the party corners Underling. Underling threatens to hurt the girl. Shortly after, Underling was sidetracked by the arrival of a pink-haired CPU. The CPU then tells the girl that was taken as hostage to transform. The girl transforms into HDD form, revealing the CPUs' identities as the CPU Candidates of Lowee. 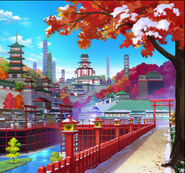 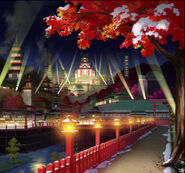 Retrieved from "https://hyperdimensionneptunia.fandom.com/wiki/Lowee?oldid=47637"
Community content is available under CC-BY-SA unless otherwise noted.