Start a Wiki
Leanbox (リーンボックス, Rīnbokkusu) is the land blessed with the CPU Green Heart's protection.

It once suffered from endless skirmishes, but peace was restored since the establishment of the Basilicom run directly by their goddess. On the other hand, because of its rough history, the Basilicom has become very strict at enforcing rules.

In Hyperdimension Neptunia mk2, Leanbox went through a huge change over the course of many years becoming more simplistic in terms and futuristic. Instead of being a nation full of nature, Leanbox had been urbanized, filled with corporate buildings, warehouses, skyscrapers, and typical urban structures. A noticable towering structure can be seen all over Leanbox. It takes a form of a collosal white structure with black streaks filled with green light in the middle of its perpendicular sides, which ends on a green circle in between.

Leanbox is represented as a militant nation, focusing on military industries. Despite its rivalry with Lastation, its neighboring country serves as its biggest importer. Thanks to Vert's "rather progressive policy" and being a fan of "otaku" stuff herself, Leanbox also strives to introduce the "moe" culture to its masses.

In terms of geography, Leanbox's landmass is located in the southern part of Gamindustri seperated from the rest, surrounded by a body of water. Its two surrounding cities are Hero City and Gargan City.

The Oracle requested an urgent meeting with Nepgear. Going to the Lastation Terraportation ship station, the party encounters Underling and Pirachu on the last trip set to Leanbox. They had a short conversation, ending with an assurance from Underling that she will wreak havoc in Leanbox while the party gets there. Apparently, the party was too late to board and had to wait another day.

The next day, the party figures out that the only Terraportation ship that goes to Leanbox was destroyed. The party suspects it was Underling and Pirachu's doing. Asking for another way to Leanbox, the crew in charge of the station said that they needed some of the parts missing for another ship that would be used as a substitute for the destroyed ship. The party then gathers the missing parts and gained a free ride to Leanbox.

Upon arrival in Leanbox, the party heads to the Basilicom. They encounter Chika Hakozaki, who was apparently acting strange. The party was requested to dispatch an "easy monster" in Gapain Fields. After the party left, it was revealed that the Oracle was actually someone in disguise.

The party finally encounters the monster. Despite the formidable looks of the monster, Nepgear went ahead and tried to defeat the monster herself. A number of failed hits passed by before Nepgear realized the monster was too strong for her to handle. A mysterious woman then arrives and defeated the monster in a short time. She introduces herself as Cave, a member of the Special Missions Department (SMD) of Leanbox. The party explained they were sent by Chika to dispatch the monster. Cave then contemplates about Chika's recent change of behavior. She even mentioned that Chika lifted the sanctions of Arfoire worship in Leanbox.

Later at night, the party hears a concert and decided to watch. Later on, IF spots Underling, chasing her to stop her from causing any trouble. The party follows suit but then encounters Cave again, who was serving as a guard on the party. She chases Underling instead but came back when Underling got away. She revealed that 5pb. was an indirect supporter of Leanbox's CPU, which makes her a usual target of ASIC.

The party encounters Rom and Ram, who was taking shares for Lowee from Leanbox. Nepgear asked them if they knew anything about Chika's strange behavior. Ram suggested that the Oracle was a fake. When they encountered Uni, they asked the same thing to her. Uni revealed that she had met the Oracle a long time ago. After Nepgear's begging for help, Uni agreed out of pressure and went with the party to Leanbox. Uni reveals that the Oracle was a fake and was Underling all along. As usual, Underling runs away. The party follows suit to figure out where Chika was held up on. The party eventually find Chika and returns her safely back to the Basilicom.

The party receives a distress call from Chika that Leanbox is under attack. As the party arrived in Leanbox, they discover that Underling and some of the Arfoire Factory workers were the ones wreaking havoc. Underling and the workers retreated after a short exchange of words with Nepgear's party. Chika called the party again and said that the attack was a bluff. While the party was in Leanbox, Planeptune was ASIC's actual target and is under attack by ASIC forces under CFW Magic's lead.

In the Ultradimension, Leanbox is described as a large island nation found across the ocean. Being on a different continent from the other nations, it has developed its own unique culture. Apparently, everything there, including its foods and game systems, are super-sized. 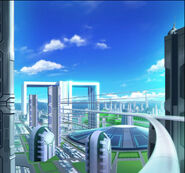 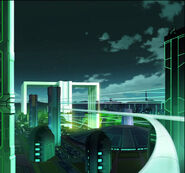 Retrieved from "https://hyperdimensionneptunia.fandom.com/wiki/Leanbox?oldid=48091"
Community content is available under CC-BY-SA unless otherwise noted.