Lastation (ラステイション, Rasuteishon?) is guarded by the goddess Black Heart. For some people, they call it "The Land of Black Regality" or "steam punk" among other things. In terms of theme, it can be said that Lastation is the darkest of the four landmasses run by the Hearts. It is also call the Heart of Gamindustri due to being surrounded by the other three nations in MK2.

When Neptune, Compa andIF visited the steam-punkish landmass, they were to find out more about the place at the Basilicom only to face a moderator who underestimates them as well as treating them negatively. The gang then decided to explore the landmass on their own.

They encounter robotic pets, and then met Chian, who runs a small factory called Passe in the central city. Chian then gave the group a task to get rid of the monsters attacking their carriages and trains. Here they also discuss that business in Lastation is not progressing very well due to a major company called Avenir monopolizing the industry. This causes small factories to close down as a result. Regrouping at Chian's restaurant/house, Chian confirmed how horrible Avenir is taking all their clients and mentioning that they could even take over the entire landmass if they are not confronted. Chian also expressed that the Goddess of this land as well as the basilicom turn a blind eye from this situation and briefs them about an upcoming Technology Expo this year. Their aim is to win and then negotiate with the Goddess directly to solve the situation.

The group accepted Chian's offer to take care of the monsters from distracting her while she prepares for the Expo. Some time later the group took up a job from a client by the name of Singe who gave them the task of eliminating monsters while he is away examining a plant by the city outskirts. After the group is done with the task they reported back to Singe to inform him about the completion of their duties. However, things get sour when Singe says that he will never do business with them again should even one monster come and damage the facility. Singe speaks about how machines are superior to humanity making Compa cry from his rudeness as he left.

Meanwhile Neptune and gang are back at Chian's place as they learned much more about Singe. Singe is revealed to be a man who sees machines in a better light than the pride and skills of human technicians, one of the reasons why Chian despises him. Chian also disclose the fact that Singe is the head of Avenir, as well once being her alumnus. Chian proceeds to set them on a new objective, to go to the next town and acquire materials from a guy by the name of Chevre with a map to direct them to his shop. Suddenly the public broadcast by the Basilicom announced the cancellation of the Expo this year due to the decreased number of exhibitors although the civil committee speculates that it was the Parliament that pressured the Sanctuary into it. Chian upon hearing this became anxious and stressed despite Neptune's comforting words, this is because Chian exclaimed that this was the last chance her factory had to survive.

Neptune and the group (already onto the next part of the event) planned out about their actions. They decided to give Chian some time while taking a job to look for a lost child, at that time IF was disturbed because they had not progressed on for the key fragment. Compa talks about saving the people means saving the world, and she has compassion for the mother. IF, on the other hand, claims it's survival of the fittest. In the end, Neptune agrees with Compa's view, the trio then begins their quest for the lost kid...

Meet the Newtype of Lastation[]

On the quest for the lost kid, they were in a dungeon and through some in-game battling, while IF was examining a dead monster and Neptune and Compa were waiting patiently until they encountered a girl who is similar to Neptune in her HDD form . When the mysterious girl saw Neptune, she started to duel her but the mysterious girl was outmatched by the trio. She then warned Neptune she will return and then retreats leaving a frustrated IF and a confused Neptune. Questions about this girl soon begin to form.

It's theme looks like that of steam-punk. It's rather dark and smoky compared to the other landmasses.

In Hyperdimension Neptunia Mk2, it looks less smoky and a little cleaner after many years. There are more modern buildings.

The Central City of Lastation. 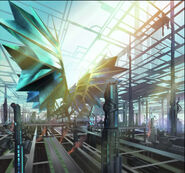 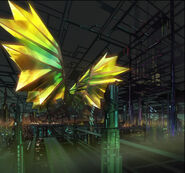