"I will eat everything in the universe!"

An elusive girl with a penchant for teasing others until she makes them angry. Her age is a secret but compared to most, it seems she is at least a generation ahead of them, due to her interest in retro gaming and hatred of youth. Her biggest trait seems to be the fact she loves to eat, implying a gluttonous nature.

Lady Wac is a pale-fair skinned girl with long, pale blonde hair that is worn in puffed pigtails and long bangs covering her eyes. which are orange. On her head she wears a dark purple frilled head band with a big bow attached to it that has an orange center piece and a little diamond to the side.

Wac wears a dark pink dress with dark purple ruffled detailing and a matching neck, with a small gold pendant in the center to match the buttons below her breast, which are covered by a translucent material. The skirt of her dress appears to be very frilly and long, with light violet, and pale pink detailing, as well as a little blue creature that pokes out of the pocket and a colorful cherry on the bow. She also has white pantyhose, black maryjanes with strawberry clasps to resemble chocolate covered candy, and dark pink, lower arm sleeves. 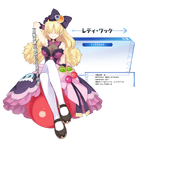 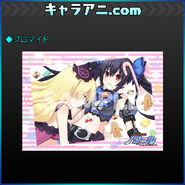