Hyperdimension Neptunia U: Action Unleashed (超次元アクション ネプテューヌU, lit. Super Dimension Action Neptune U) is a Neptunia action game announced by Compile Heart at the 2014 Dengeki Stage Event and is helped being developed by Tamsoft who is known for their work with the Senran Kagura games.

A world protected by the divine aegis of the four CPUs and the CPU candidates.

Even in this world the seeds of evil don't die out, and since brutal enemies along with ferocious monsters that appeared were quickly defeated by the collaboration between the CPUs and the CPU candidates, not only the goddesses themselves but also the inhabitants of Gamindustri ended up very bored.

Due to that, the goddesses discussed an interesting proposal...

Neptune, Noire , Blanc, Vert, Nepgear, Uni, Ram and Rom have been revealed to be in the game.

Two new playable characters named Dengekiko and Famitsu are also making their appearance in the game, both being based on Japanese gaming magazines (Dengeki and Famitsu, respectively). 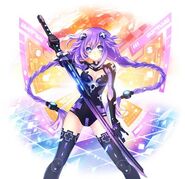 Retrieved from "https://hyperdimensionneptunia.fandom.com/wiki/Hyperdimension_Neptunia_U:_Action_Unleashed?oldid=42770"
Community content is available under CC-BY-SA unless otherwise noted.