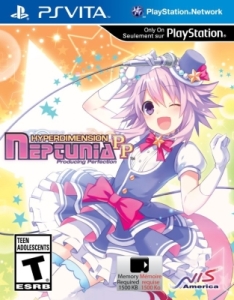 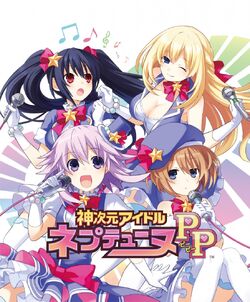 Hyperdimension Neptunia: Producing Perfection (神次元アイドル ネプテューヌＰＰ Kami Jigen Idol Neptune PP) is an idol simulator and rhythm game developed by Idea Factory and Tamsoft, and published by Compile Heart in Japan and NIS America in North America, Australia, and Europe. It was released on the PlayStation Vita on June 20th, 2013 in Japan[1], June 3, 2014 in North America, in Australia on June 5, 2014 and in Europe on June 6, 2014.

All of a sudden an idol game appears and MOB48 (a joke referencing the actual idol group AKB48) is taking share away from the CPUs. You have to get it back by earning stage points during live performances. Each show the number of fans and haters will change depending on the show. You can choose costumes for the idols and change the camera angle. During live events, the CPUs can transform which also transforms their singing voice.

Neptune, Noire, Blanc and Vert are all set to return in this game. However, according to the official website, they are in their Victory costumes.

The sisters, Nepgear, Uni, Ram and Rom are also set to appear in the game, you can use them in the concerts as background dancers in unlimited live mode only.

IF and Compa are also usable as background dancers as well.

The goal of the game is to get fans. You can send Neptune and the CPUs out by picking the "business" option from the main menu. There are events, media shows, and other publicity stunts you can do to promote the Neptunia idol troupe. If you want to give the CPUs a break you can select "off" which also lets you see scenes of the idols talking. Pick "lesson" and you can increase the girl’s stats. You can also select "move" to relocate your office to get fans in other regions.

When it’s time to perform you can select live mode. The CPUs will take the stage to sing and dance. You can pick costumes for the CPUs. The CPUs that perform can increase their share in the region their act is in. There are times when monsters like the Dogoo will come on stage too in Unlimited Live events. [2]

Retrieved from "https://hyperdimensionneptunia.fandom.com/wiki/Hyperdimension_Neptunia:_Producing_Perfection?oldid=47355"
Community content is available under CC-BY-SA unless otherwise noted.