Hyperdimension Neptunia: Hello New World is a manga that was written in 2013. The artwork was done by Mikage Baku.

The manga tells the story of the mishaps/adventures the CPUs and Candidates go through in their daily lives. The events appear to happen in the Animation timeline.

Histoire gives the readers a synopsis of the realm of Gameindustri. She tells of a goddess with remarkable beauty and was incredibly witty. She only wished that the girl was so "divine". That goddess was non-other than Neptune. Neptune then introduces herself also breaking the fourth wall as usual. Histoire scolds her about doing her work even during this period of piece. However, Neptune gets sidetracked when Nepgear comes in with Noire who was visiting. Noire plays off her "tsundere" characteristic by saying "she was just passing by" while caring a bag of pudding. Neptune is excited for the pudding because she notices that their was enough for everyone. Histoire tries to continue her conversation, but Neptune pushes it off to the side asking her if she wants some pudding. At this point, she snaps at her with her scolding "piercing" Neptune straight through her head. Nepgear tries to calm her down, but then Histoire turns to her. Histoire tells her that she always spoils Neptune because she is her sister saying that Neptune need to take her job seriously with her needing to be more disciplined. She says while trying to carry the bag full of pudding. Then, she asks Noire to take the two on a quest. She shes Lastation's CPU as diligent with a good job making her country flourish, but she sees Planeptune at its limit. However, Noire sees it as Histoire is at her limit. She agrees to take the two out on a quest, but before they leave, Neptune asks if she can have her pudding back.

Their quest takes place at the outskirts of Planeptune in the Virtua Forest. The job is to exterminate some monsters around some ruins. Noire gives the reason why CPUs take quests because they increase the shares of their own country. They soon reach the area where the monsters are when Neptune jumps the gun and starts attacking. However, her attacks seem to be dealing hardly any damage. Nepgear believes the reason was because her laziness reverted level back to level 1 (this was a joke from Hyperdimension Neptunia Victory). This was when  the monsters started chasing her. Luckily, Noire steps in to attack with the help of Nepgear and defeats the horde. Neptune offers Noire a health item as a gift called "Nep Bull". For Noire, she knows that they defeated the swarm, but there is usually a boss to along. Suddenly, a giant bud shoots out of the ground with its roots entangling both Noire and Nepgear. Neptune gets the idea that this is the "H-Manga Tentacle Development" with Noire trying to snap her out of this idea. She is snapped out of this from Nepgear's cries for help. Neptune tries to get the attention of the boss with some "fan service", but it brushes her off lowering a bit of her self-esteem.

Neptune transforms into Purple Heart slashing the roots from Noire and Nepgear saving them. Then, Noire later transforms into Black Heart and the begin to lunge at the giant plant. They ultimately defeat the monster, but they also destroy the ruins in the process. The next play,Histoire discovers news about the destroyed ruins in the newspaper. She asks Neptune about this and appears to faint with blood coming from her mouth.

When Lastion's shares reach higher than the others, Neptune, Blanc, and Vert form an idol group in an attempt to increase their Shares.

Chapter 3 "This Time, The Sisters Will Give It Their All!"Edit

The CPUs and Canidates go to beach since their sisters wanted to play and make good memories, but instead the older siblings were invited to see their siblings crowding around Vert. As a result, Neptune, Noire, and Blanc began to try various ways to win back the affection of their sisters. Noire and Blanc go "out-of-character" in their attempt, but it backfires on them. For Neptune, she learns that she lost Nepgear because of Vert's large breasts, feeling that she lost as a woman. However, the Uni, Rom, and Ram feel bad for their older siblings and apologize to them giving Neptune a start. Nepgear says that she is still her sister but she cannot resist the feel. This is when Neptune tries to offer pudding to her and saying that she has the "best butt" out of the four. The Canidates hear this and begin to shower their older siblings with fanservice to their own dismay. The Purple Siblings make up with Neptune transforming into Purple Hear saying she will always be there if she needs to.

Neptune and Compa decide to try find a more feminine look for IF. This leads to asking for the opinions of the other goddesses. They end off in Leanbox where Vert creating a machine called the "Illusion X" for dress up. IF goes through many costume changes and ultimately ends up whereing the "Naked Ninja" outfit to her embarrassment (with Mysterious Light-san protecting the essentials). IF then attacks Neptune with the conclusion being that "normal is best".

Chapter 5 "Thanks for the Meal"Edit

Neptune grows extremely large in size (literally) after eating a wild mushroom in the forest. It was up to Noire to find the cure for Neptune. As time passes, Neptune grew larger and larger to the point where the news stated that a giant monster appeared on top of NepTower. Vert and Blanc came in and helped Noire give Neptune the cure reverting her back to normal. The chapter ends with Neptune again eating the antidote turning her into a smaller version of herself

Histoire scolds Neptune again about not taking her job seriously as a CPU. Neptune escapes her scolding much to Histoire's annoyance. She then starts to think out loud the negative effects of her laziness, with one of them being that Neptune will die. Unknowingly to Histoire, Nepgear came in at the wrong moment where Histoire says "Neptune-san will die for sure..." taking it as the truth. It then cuts to Neptune who is in the shower while saying it is her "fan-service scene" when Nepgear rushes inside. Neptune begins to ask her what is wrong which leads her to be completely shocked when Negpear said she heard Historie said she was going to die.

Chapter 9 "This Reminds Me of When I Pull All Nighters Playing Games..."Edit 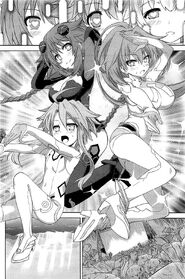 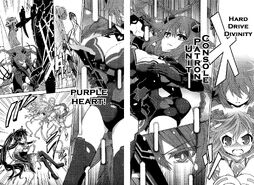 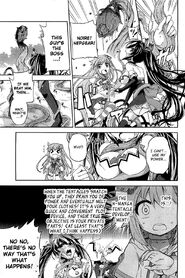 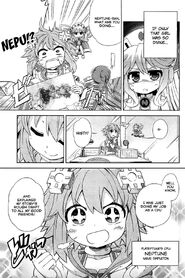 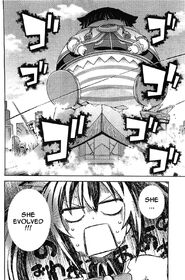 Add a photo to this gallery
Retrieved from "https://hyperdimensionneptunia.fandom.com/wiki/Hyperdimension_Neptunia:_Hello_New_World?oldid=45216"
Community content is available under CC-BY-SA unless otherwise noted.