Estelle is a person with a bright and simple disposition. She comes off as very innocent and calls herself a hero in search of legendary things. But her actions are never done with ill intent, although it still winds her in trouble...

Estelle is a fair skinned girl with aqua colored eyes and brown hair. It is about shoulder length and flips just slightly outward with a sharp cowlick and her bangs held down with a gold tiara that has a big ruby in the center.

Estelle wears a blue, slightly revealing armor-like dress with gold, and light blue detailing. Around her waist is a brown belt with silver pieces and a red tied rope on it, and in the center of her chest is a red diamond. She also wears a pink short cape, brown gloves, and black stockings with detailing on top. Her brown boots have white and gold accents with gems in the center.

Erdrick/Loto, the inspiration for Estelle 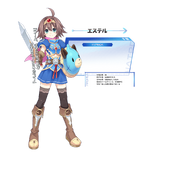 Estelle and Noire Boing Boing
Add a photo to this gallery

Retrieved from "https://hyperdimensionneptunia.fandom.com/wiki/Estelle?oldid=47982"
Community content is available under CC-BY-SA unless otherwise noted.