"Smash! Smash! Software that the incredible myself cannot copy doesn't deserve to exist in this world!"

Copypaste (コピリーエース, Kopirīēsu?) is a new enemy introduced in Neptunia V. He is one of the Seven Sages.

He carries within himself tools for illegal copying, and he's the self-proclaimed strongest power type among the Seven Sages. However, his intelligence is horrible. He likes to destroy things, he loves copying software among all other things, but since his abilities are low, he manages to copy only old ROM cartridges. Since most of this body is a machine, even if he's badly beaten while fighting, once he has the chance of repairing himself he can still fight. 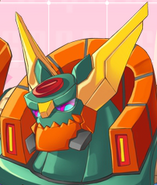 Retrieved from "https://hyperdimensionneptunia.fandom.com/wiki/Copypaste?oldid=46016"
Community content is available under CC-BY-SA unless otherwise noted.