CFW Trick is one of the Four Felons, the leaders of the Arfoire Syndicate of International Crime (ASIC). CFW Trick is an incarnation of all the frustration players feel when a game is too difficult to beat. He really likes cheaters and those who don't have difficulty when playing Hgames.

As he likes cheaters, Trick may also like to cheat or be tricky with others. He acts as a dirty old man towards younger girls and licked Ram and Rom due to everyone watching and finding it disturbing to the point of doing nothing.

It's also been said Linda has a hard time with him due to this.

A drooling, dirty yellow armored like being resembling either a pig, or possibly a lizard with an enormous tongue like piece. He has a scaled tail, almost reminiscent to a snake's. He has horn-like flames shooting out of his head, and a spiky, green shell.

Trick is first introduced in Chapter 3, having taken control of Ram and Rom to force them to fight the party. He is then fought and beaten himself and flees. He later returns in Chapter 5, attempting to stop the heroes from reaching Magic. He is fought again and killed.

He is later resurrected in Chapter 7 with a color change and appearing even more disturbed, mentioning a desire to eat Rom and Ram's eyes. He is once again fought and killed, dying happy that his death was at maiden's hands.

CFW Trick only appeared in the second episode of Hyperdimension Neptunia: The Animation. He and Underling were hired by Arfoire to kidnap Rom and Ram. Trick kidnapped Rom and Ram and easily defeated Nepgear and Uni but later he was defeated by Blanc and Vert. He appeared as a cameo in the OVA in Rom and Ram's nightmare where they were going to marry him due to Bad End Syndrome.

Trick primarily uses his tongue as an offensive weapon, using it like a whip to strike at his enemies. The drool seems to have both healing and status inflicting properties. He also seems to have the ability to control others, as shown with Rom and Ram. 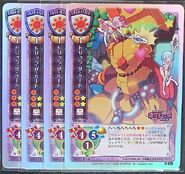 Add a photo to this gallery
Retrieved from "https://hyperdimensionneptunia.fandom.com/wiki/CFW_Trick?oldid=48125"
Community content is available under CC-BY-SA unless otherwise noted.