CFW Magic is the head member of the Four Felons and a devout follower to the Arfoire Movement .

She is part of the group that kidnapped and fought the Hearts, managing to single-handedly beat them all at first. She even managed to stop a sword from Purple Heart with just a hand inches from her body..

She looks up to Arfoire like a goddess and acts as her protector and as such, she remains confident and fearless against all odds. She is the personification of a Fangirl/Fanboy.

It is unknown if she knew how much Linda/Rinda admired her.

Magic appears to be almost nude in appearance. Being one to wear very revealing/barely-little attire in total. Her skin is a lilac-white color, which she compliments with purple makeup/lipstick. Her eyes are yellow, while her nails are light pink colored. Her hair is a bright pink-neon color, worn in pigtails with long spiked bangs framing her face. For some reason she wears an eyepatch.

Magic wears black armor type clothing with her outfit resembling a very revealing Bikini attached on the sides by straps. In her hair she has spiked/webbed-styled pieces on both pigtails, along with a halo-like ornament above her head. On both arms she has black armor resembling gloves that are fingerless and begin at her elbows. Her boots also are made of armor and begin at her knees. Her wings are spiked segments attached to each other with pink "blades" on the bottom of each one. Her clothing appears to be a twisted parody of the CPU's outfits.

Magic faces Nepgear at least twice in the game, once with Nepgear and her friends and the other time with her sister and the rest of the Hearts. When Magic emerges victorious in the first battle, Magic swings her weapon ready to kill her until Neptune arrives to rescue her.

The party faces her again in Gapain Field, and they manage to defeat her but she reveals that defeating the Four Felons only helps their plan to resurrect Arfoire as they were only pieces of her body before she blows up.

In Chapter 7, Magic is revived along with the other Four Felons. She and the others then issue an ultimatum. The people of Gamindustri must worship Arfoire in ten days or they will kill everyone.

The party faces Magic in Gapain Field again after witnessing her nearly kill Linda because she thinks that causing a mass genocide was not what Arfoire wanted. Linda becomes so distraught because the person she looked up to decided to kill her she and Pirachu left. The party manages to defeat her again causing the true DOS Arfoire to be revived.

CFW Magic fights using a scythe and has been shown to be exceptionally strong, being able to take down the Goddesses with ease at the beginning of the game. Also, she has an attack called "Ice Impulse" where she uses one hand to blast the enemy with a wave of ice. 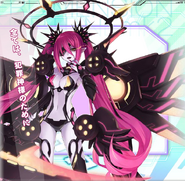 Retrieved from "https://hyperdimensionneptunia.fandom.com/wiki/CFW_Magic?oldid=46063"
Community content is available under CC-BY-SA unless otherwise noted.